Skip to content
On Friday 10th January, Dan Holloway from the University of Oxford Department of Linguistics and Phonetics kicked off the Rumble Museum’s Future Season Breakfast Talks with an introduction to memory palaces and creativity to 25 students.
He started by introducing the idea of a memory palace, an imaginary place in one’s mind where information could be stored using a series of images. The notion of a memory palace has been made famous by the TV series Sherlock, but was used in ancient Greece and Rome, where thinkers and writers such as Cicero wrote about the method. He then asked the students to take part in a memory palace activity. He showed the group ten images which looked like the first ten numbers, for example, a lighthouse for the number one, a swan for the number two, and a violin for the number eight. 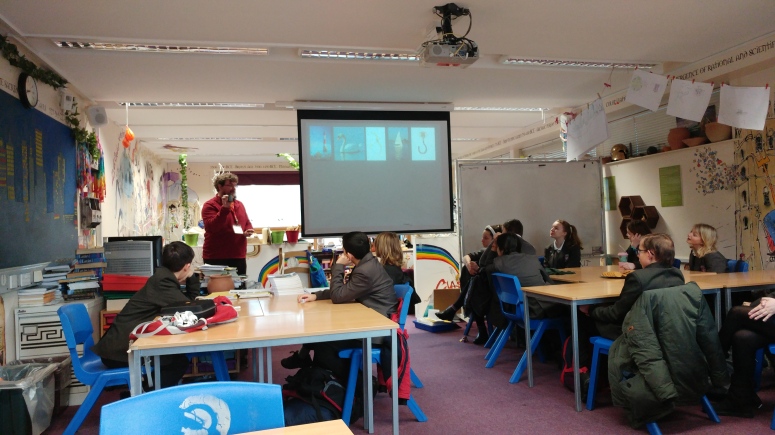 He then picked two cards from a card game Mycelium which Dan himself had devised, and associated two items to each of the ten images by telling a story to connect the three images. So, for example, for the lighthouse, he picked two cards – coral and palm trees, so he imagined the light of the lighthouse shining onto coral and palm trees. He did this for all ten images. When he went back through, the group remembered almost all of the stories and images connected to each original image. He spoke about students could use this method to help them memorise facts, and use things like things they pass on their way to school, and aspects of a classroom.
He spoke about how creativity enabled one to make use of the knowledge in lots of ways, so each additional piece of knowledge multiplied the possibilities for the application of this knowledge. He kindly donated two packs of the card game to the classics centre, so students can have a go at the game.
We are very grateful to Dan for taking the time to deliver a fascinating talk, and look forward to hearing about the memory palaces the students construct!